Do you have a home with EIFS stucco in the Portland Area?

Spend just 5 minutes reading the following so you know what you are up against. You'll be glad you did!

Superior Exterior Systems is a licensed local siding contractor for the entire Portland metro area. Over 25 years of business we've been called more times that we can remember to inspect, remove & replace defective EIFS stucco. Are you buying or selling a home with EIFS stucco or Dryvit stucco siding? Please take a few minutes to read this page.

Superior Exterior Systems does not install or repair EIFS stucco. In our professional opinion it is not the correct siding to use in our unique environment: it cannot handle the demands of the rainy Portland that we love.

Get An EIFS Inspection 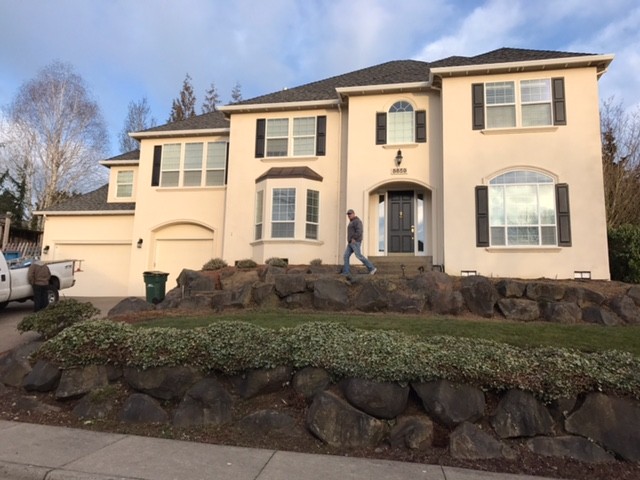 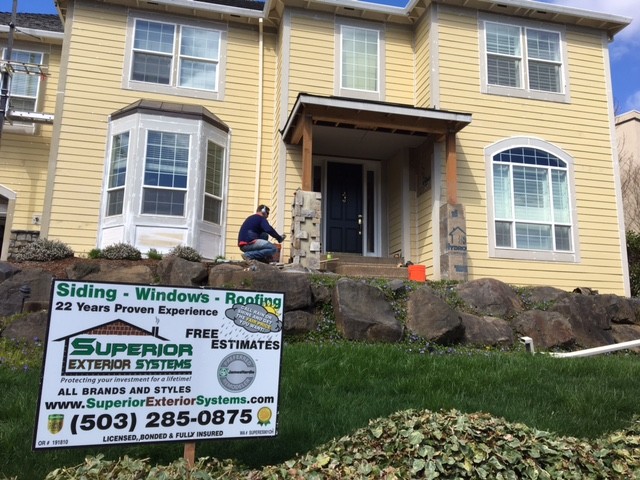 Our desire is to educate homeowners that have EIFS problems, and to let you know that there are clear and practical answers for you in dealing with EIFS stucco. We know this information will help you understand how EIFS stucco is installed and why it has problems with all our constant rain.

Over the last few decades its use has increased as builders from California migrated to the Portland area.

EIFS primarily fails because there is NO moisture barrier protecting your wood when rain gets in. There is also never window and door membrane flashing behind the stucco. Although doors are often protected somewhat under overhangs windows usually aren't, especially on any 2 story home. When rain gets trapped behind the foam the water begins to mold or rot the wood underneath the building envelope. The excessive moisture here in the Portland metro area gets trapped between the foam backing and the wood sheathing it is attached to. Usually EIFS synthetic stucco is glued on or put on with grommet style fasteners. When rain penetrates ANY cracks or openings and gets behind the EIFS, it is unable to evaporate because of the constant moisture we get. The moisture attacks the wood sheathing, framing, and studs simply because it can't escape or drain out. This leads to dry rot and toxic mold problems because of the constant rain we have here in the Portland area. The dry rot and mold damage can often cost as much as the new siding to replace it because after it gets into the wood it starts to eat away at the studs & sheeting. The rotting wood underneath the EIFS ultimately leads to the destruction of the homes structure if left untreated.

Common moisture problems appear around the areas where the EIFS meets the windows, wood trim, roof flashing, and doors. EIFS that sits below the dirt or grade is also an easy entrance point for moisture and insects to start working. Being a siding contractor in Portland and Vancouver areas for 2 decades, I have found that the worst insect problem are carpenter ants which nest in soft moist wood. They are large black ants. When my children were young I would pay them a nickel for every carpenter ant they killed simply because I often saw the damage they can do structurally as I was replacing Lp siding or Eifs stucco. If you leave a dead carpenter ant out overnight, the other ones will take the dead ant back to their nest. It usually wont be there in the morning.

Although most EIFS manufacturers have detailed installation instructions, these are often ignored by installers since few siding companies have experience installing EIFS in the Portland metro and southern Washington area. EIFS simply never should have been brought to our climate.

Another common issue with EIFS in Portland is the failure to install proper flashing systems that can hold up with our rain. On 9 out of 10 EIFS homes that we deal with the existing flashing is improperly installed or missing altogether allowing large amounts of moisture infiltration causing dry rot and mold damage on the interior framing and wall surfaces.

How EIFS is installed and removed

EIFS is typically attached to the outside face of exterior walls with glue adhesive or mechanical fasteners designed for this application. To remove EIFS, generally it is scored with a sharp knife. When EIFS is glued on, it is much harder to remove than when it is put on with fasteners because it has to be meticulously & slowly scraped off inch by inch. The white styrofoam stuck to the glue is HIGHLY resistant to coming off. In the Portland Oregon and southern Washington areas, EIFS is usually attached to gypsum board, osb-oriented stand board or real plywood. That surface should be continuous (not "open skip framing"). It should be flat and very stable. When it isn't glued it has the fasteners installed in a random pattern. This is a bit easier than glue but still difficult to remove since the fasteners end up being wherever the original installer felt like putting them. Could be every foot to every few feet. When the foam beads fall apart they need to be contained quickly although it would be impossible to contain every single tiny foam bead. It is a nightmare if any winds start up.

EIFS systems have been the subject of numerous lawsuits due to moisture buildups and subsequent mold growth. The most notable case concerned the former San Martin, California courthouse. This case was settled for the ridiculous amount of 12 million dollars.[1] The basic underlying problem behind EIFS litigation was that EIFS was marketed as a cost-effective replacement for stucco. Stucco is expensive to install because it cracks over time. Stucco must be carefully applied by skilled craftsmen so that the cracks which will inevitably develop are subtle and not obvious. General contractors who migrated to the northwest from California during the building boom of the 80's switched to EIFS because it was supposed to be easy to install with unskilled or semi-skilled labor and would not crack like traditional stucco. Many general contractors cut corners by using unqualified cheap laborers. Partially due to these unskilled workers, thousands of EIFS installations were noncompliant and suffered severe water intrusion and mold as a result. While the EIFS industry has consistently tried to shift the blame to GCs, the construction industry has retorted that using professional unionized journeymen carpenters in turn eliminates the cost advantage of EIFS over stucco, and that the EIFS industry should have anticipated this issue and engineered its products from the beginning to be installed by unskilled labor or semi-skilled labor (that is, it should have been a fault-tolerant design).